In order to create a website that doesn’t look like it comes from the birth of the internet, you need both a resourceful developer and a skilled designer. A few weeks back, we told you about web development’s most essential tools. It’s time we took a look at the design side of things. From letterhead and business cards to doctored team photos and homepage layout, this is the graphic designer’s piece of the creative pie. If it’s visual, if it’s pleasing to look at, and if it makes you buy something, chances are that a graphic designer worked very hard on that image. Here’s the top 5 graphic design tools for the avid designer to the novice creator.

Hey, can you work your magic on this?

Most people, and I mean most people in the world, have no idea how a graphic designer does what they do. You give them an idea, sometimes a very vague one, and it becomes real. Magic! Well, there are a series of programs, tools, tricks, and techniques that designers have at their disposal. Every piece they work on makes use of this arsenal. In the process, that project will also help their arsenal grow. That’s a great thing, because the field is changing every day.

To shed some light on these mysteries, we’re going to introduce you to the tools that many graphic designers say are the most useful available on the market today.

Most designers these days could probably get away with using Photoshop for just about any task. Hopefully, they’re turning to other products for more specialized projects, but you can’t deny the versatility of Adobe’s flagship software.
It was originally introduced as a simple photo editing program. Over time, as more and more features were added, use expanded to encompass everything visual from creating GIFs to 3D printing. Any time you see a model who’s been touched up in Time or GQ, that was Photoshop. Text that wraps around an image, websites with classy hero sections: that was also Photoshop. Not all designers love it, even if most of them use it. It can be clunky or unresponsive. Perhaps that’s just the product’s age catching up with it.

Although its big brother gets all of the credit, Adobe Illustrator is behind much of the web design you see today. Photoshop is necessary. Illustrator is fun. It’s meant for vector work, which is when a complex image is broken up into malleable pieces. Some vector work can be done in Photoshop, but you really want to start in Illustrator and import it into PS as a “smart object.”

Many graphic designers use a tablet and stylus with this application, even though the design of Illustrator already mimics that natural feel of having a pencil in your hand. If you’re creating new images from scratch, this is what designers tend to rely on. Whether we’re talking stylized text, clean graphics, or even photo manipulation, Illustrator is what you want to use. Wallets beware, though: Like the rest of Adobe’s creative software, this one carries a hefty price tag. Be prepared to shell out some clams for this puppy. 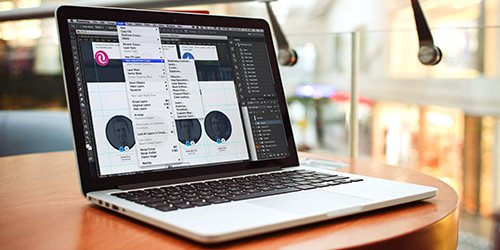 Some say that Sketch is Photoshop for UI. It is built to work directly with front end development, and that’s why designers love it. If you’re mainly working offline, you still will rely on other tools, but for designing a new website, Sketch is your go-to.

What might be the most beautiful thing about this product? It’s new, so the devs are still pumping out updates and looking for key changes at both the micro and macro level. Unlike its older competitors, who sometimes struggle to assimilate their ancient product with a modern industry, Sketch has the advantage of growing up in a world already teeming with graphic design advances. That being said, observation does not equal experience, so the company lacks that level of insight.

Where does this fit in with the rest of the Adobe Creative Suite? I’m not entirely sure that it does. For a number of digital marketers, Sketch is the final word, skipping over Adobe’s established software and consolidating all their files in one program. If you’re looking to save cash and keep up with the crowd, this is a darn good investment.

Not exactly the first choice for digital marketing specialists, InDesign is primarily meant for producing collateral. Brochures, posters, flyers, or even ebooks. With InDesign, you’ll always have something flashy to hand out at the trade shows. If Illustrator is the place to create, and Photoshop is the platform for polishing, InDesign is where you add your borders, mass text, and formatting for print. In other words, this is usually the last in a virtual assembly line.

It’s not a competitor with Sketch or other more web-centered programs, but you’ll find some designers who prefer to do all things in one place. They may forego the tall price of one more Adobe product and just do it all in Photoshop. Despite this, InDesign is still invaluable for a marketing department to have on hand. You’ll rarely find a program that’s so specialized for print design these days.

There is no denying how useful scratching down your designs on a notepad can be. Lie back on the office couch, prop yourself up on one elbow, and draw what comes to mind. Getting away from the constant gleam of a computer screen can do wonders for your creative superpowers. And it will help you practice your craft organically.

As a graphic designer, the programs you work with become lifelines. Busting out the old drafting table and getting to work on some original concepts will always be the most reliable tool in this field. Designers occasionally eschew computers and tablets so that they can remember how they became interested in this field in the first place. Plus, it helps bring out some of your best work.

The right tool for the job

Part of what it means to be a graphic designer, especially in digital marketing, is a knack for adaptability. Every task demands very specific skills, knowledge, and utensils. If you can, try to learn all of the major programs out there, or at least pick up the basics. Find out why a certain interface is different and focus on the ways some are the same. Like driving a new car, the more different cars you’ve driven, the better you’ll be at figuring out the next one.

So, how do graphic designers work their magic? How do they produce such sleek handouts or give you the very latest in a website layout? Easy — they never stop learning.