I had planned to write a step-by-step guide when I set about researching Reddit: Five Essential Keys to Working With Reddit, or Ten Easy Ways to Get Notoriety on the Front Page of the Internet. Unfortunately, Reddit had other plans. Unlike creating a guest post on a third party website, there is a whole community who decides if you gain recognition for your work. No one person has all the power, and notable content seems to sometimes rise to the top arbitrarily. In other words, when I dove into the murky waters of this deep lagoon called Reddit, I had my work cut out for me. But, with over 135 million unique users visiting the site just in the past month, the rewards were too great to pass up.

In a nutshell? It’s a socially-moderated news forum for thousands of different topics. You post a link to an article, a technical question, an open-ended hypothetical, or what have you. Other users “upvote” this if they think your post is important or newsworthy. They “downvote” it if they see it as self-promotional or not worth anyone’s time.

The more upvotes you get in a short amount of time, the more likely your post will be seen. Users can comment on each other’s posts. As you post more cool stuff, you get “karma” points, which represent your contribution to the community.

There are “subreddits” too, which are pages on the site for separate topics. Everything from a place where literally anyone can host a Q&A, to art appreciation communities, scientific discussions, digital marketing forums, and even pages for cat lovers to post pictures of their pets with piles of money. So, you have a wide variety of outlets to submit just about anything.

I did research on integrating digital marketing with this social model. Most websites were like this guy: a sterile analysis of the methodology they carefully constructed through processes of— boring, right? And virtually useless for a marketer. Why does no one in marketing know how Reddit works? Because no one knows how Reddit works. I’ll come back to that.

With little outside help, I hopped on the site and began scanning conversations. Most names I saw were closer to PrinceJellyfish007, ThisisJoeCA, and ecwff1159. Total nonsense. Some were more clever, like Foxy_CleoPackRat and MomToWedThorFriday. I made a name based on what I saw and got cracking.

My first several posts were anecdotal. I had no idea where to find news that a thousand other Redditors hadn’t already seen, and writing stories seemed like the simplest way to bring something new to the game. Wacky tales about previous jobs or funny teenage blunders were not getting the upvotes that I was looking for. No one seemed to care about my yarns, and some even felt the audacity to give them a big fat thumbs down. The outrage!

Naturally, I was promptly schooled on how little blog articles and Reddit posts have in common. For instance, a post’s title for most subreddits should tell the story well enough that you can safely vote on it without clicking on the link. In an industry where every title is treated as an incentive to read rather than an incentive to not, this made my mind explode. What you post is just as important as how and where you post. Something that seems like it fits comfortably in the subreddit /r/funny actually is more at home in /r/jokes. Who knew?

My own stories were not cutting it, so I redirected my approach. I dropped comments on conversations left and right. Most of these were either opinionated (which I thought would drive controversy) or a sad attempt at humor (mostly puns, not good ones). Once again, no one gave a hoot about what I said. At best, I would get a pity vote here or there. What’s more I began to notice long threads of elaborate jokes, where comment after comment was so well-orchestrated that it seemed as if the whole site was being controlled by some robot overlord.

I realized that most of these coordinated comments were either drawn from past posts or pop culture. Conversations between people who seem like old friends are really nothing more than common knowledge from users who read the same subreddits. How do you master commenting? Spend a lot of time reading comments.

Sit back, relax, and enjoy the show

That was an epiphany. There is no one way Reddit works, and there is no cracking any code. It’s just a microcosm of the internet, so what seemed like an impossible medium to hack is actually subject to the same rules of digital marketing we’ve been using. Sit in the forums, watch the home page to see what’s popular, listen to veterans, and learn the culture. Lather, rinse, Reddit.

My first big post was in the TIL (Today I Learned…) forum. I had an interesting factoid I remembered a friend mentioning about how Matt Damon and Mark Wahlberg have a pact. Should anyone mistake the one for the other, they will just go with it so as not to embarrass their fans. Neat, but is it real? A quick search told me that it was true. I grabbed an article from a reputable celebrity news source and wrote a title that was simple, short, and straight to the point. 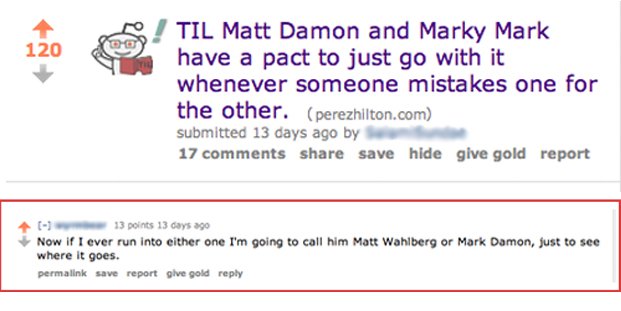 This went up at a late hour, and I got 120 upvotes by morning. I was thrilled, but I also knew that 100 is nothing. Front page news on Reddit is anywhere from a few thousand to several tens of thousands. I picked an interesting topic, placed it in the correct location, and wrote an eye-catching lead that linked to solid content. The bad news is that traffic plummets late at night.

I found a website called RedditLater. The free service they offer can give you an up-to-date report on peak hours for each subreddit you’d like to post in. Since stats change with the tide, always check this site before publishing your news.

For my next trick…

With a win under my belt, I went back for more abuse. I remembered an old book I had bought years back with a very strange title. The whole thing had been mistranslated, and the errors made for an absurd title on the cover. Redditors use a site called imgur to upload pictures that can be linked directly to a post. The website is incredibly intuitive to use, actually having been designed by one of Reddit’s own.

I uploaded my bizarre book cover to imgur at a peak hour and let the magic happen. I didn’t see much traffic, so I tried posting in a few other locations until I started to see more hits. This time, I garnered the same amount of upvotes as my first post.

Had I plateaued? Was my Reddit game over? Will I just be a member of the 100 point club forever!? My content was good, my link, location, time, and title all made sense. The problem wasn’t me. The problem was the community. That’s the risk you take with any internet publication. You may have an audience, but taste isn’t subject to the whims of the poster.

Knowing I couldn’t replicate my original posting streak forever (if only because I didn’t have enough funny foreign books or secret celebrity gossip), I turned to the most random website on the internet: StumbleUpon.

Their service gives people a platform through which to discover new websites through virtual serendipity. Some of you may already be familiar with using them as a method for gaining visitors to your site. I made an account, punched in the topics that fit the subreddits I frequented and “stumbled” until I found something cool enough to post about.

“Today I Learned that Google made a detailed, interactive map of the galaxy in HTML5, just to see if they could.” 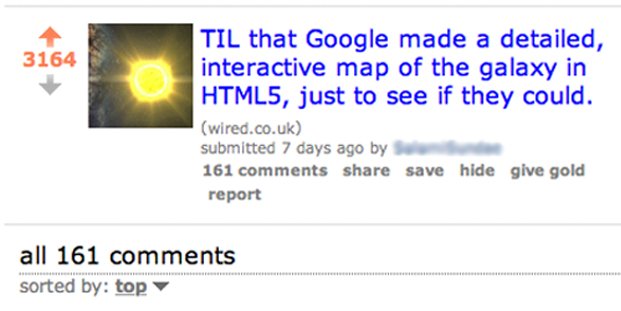 That was the title I posted. Not knowing something about Google these days is practically unheard of, considering the corporation is part of our daily lives. This grabbed me over 3,000 upvotes and enough Karma to knock out a horse. My TIL post soon occupied a spot on the front page. Space is limited up there, and sticking around for more than a few hours is rare, but if you can learn from the community, follow the rules, mimic the experts, and use the tools available to you, then you’ve got the hang of this already.

Even if Reddit doesn’t become my flagship platform for content marketing campaigns, I came away from this with a greater versatility and an open mind. The web is enormous, and there are probably a million other innovative social sites waiting to be born. Bring them on, internet. We’re ready for the next challenge.