Last year, we posted about some of the big changes coming to mobile phones in 2019. We poked a bit of fun at the “folding phone” a few companies were designing – didn’t we already go through a flip phone phase? It appears our tomfoolery was in vain, for the epoch of the bendy phone is upon us! With the notable exception of Apple, most of the major handset manufacturers have been hard at work putting out their unique take on this bizarre trend. You can decide for yourself if a folding phone is for you, and whether they’re here to stay, as you read our guide to this year’s upcoming lineup!

When you hear “foldable phone,” you probably think of an old flip phone. Or maybe you picture something a little more whimsical or ridiculous. Like a device as thin as paper you can turn into origami when you’re not making a call. Those science fiction novelties are a long ways off, and the most realistic folding phone is also the most useful. Instead of a very wide, long, thin handset, you could have a slightly thicker phone that blooms into a seven- or eight-inch tablet. Fully functional either way. The new phablet is coming. 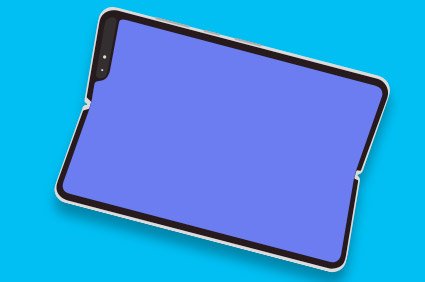 Samsung throws a lot of stuff at the wall to see what sticks. The Edge was released to mixed reviews. Their Galaxy Note series has remained popular for the right audience – most critics recognize that wanting a bigger screen is a matter of taste at this point. Their new stab at the phone/tablet hybrid is the Samsung Galaxy Fold. Reviews have been more critical of the sacrificed headphone jack than they have of thick widths, so we doubt they are going to hate stuffing an extra few millimeters of tech in their pockets. The phone closes like a book, with a front 4.5” OLED display. And then it opens up for an interior, foldable 7.3” display. Both the rear and interior feature cameras. The UI is being designed to take full advantage of the extra real estate, allowing users to run three apps simultaneously. Overall, a lot of usability and hardware has been packed into the device, including 512GB of storage space and 12GB RAM. And for good reason, because this handset is hitting stores at nearly $2,000. 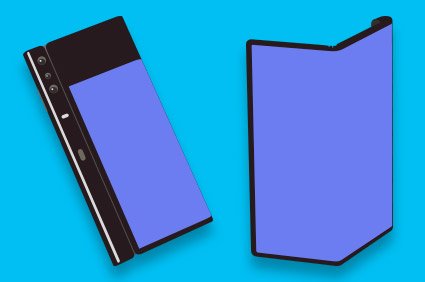 Samsung isn’t the only game in town providing the most useful foldable; at Mobile World Congress (MWC) 2019, Huawei announced the Mate X. Unlike the Galaxy Fold which has the front display and then an interior folding display, the Mate X will sport a wraparound screen that extends from the front right bezel around to the fixed rear camera. This means that while the phone is closed, you still have the possibility of a usable screen on the back. The display might unleash some interesting possibilities, but as Sony has shown with the PS Vita’s rear digitizer, a touch screen on both sides isn’t ideal. We will have to see how app developers make use of this technology. The Mate X will set you back 2,600 big ones, so for a higher price tag, you are getting less total screen space. But the 6.38” and 6.6” closed displays combine to make one 8” tablet, so the unfolded product is a bit bigger than Samsung’s.

Oppo is also releasing a foldable phone. Not yet. And maybe not in 2019. But they are working on a folding prototype that was also glimpsed at MWC 2019. Oppo’s prototype looks and opens similarly to the Huawei model. Images from the vice president reveal a thick bezel but a seamless full screen in tablet mode. We will have to watch closely as more updates on this model trickle in. As of now, there is no release date or price.

Wearables: the snap bracelets of phones

On September 9th, 2014, Apple announced the first smartwatch, the Apple Watch. It came out the next year, and it didn’t cause much of a stir. An indulgent product, the accessory seemed to be more of a cool callback to James Bond movies than necessary hardware. Since then, Samsung and Apple have dominated the smartwatch market, and a niche has been found – these gadgets are replacing Fitbits and other fitness devices. What was at first a cluster of neat features are now bonus capabilities of your own personal trainer. It’s become clear that wearables are no more a fad than smartphones themselves. 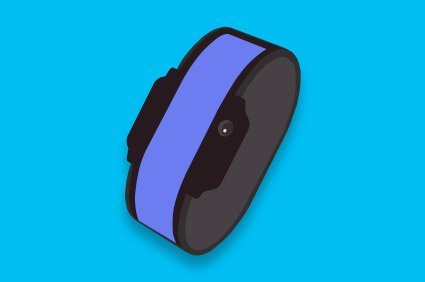 Nubia Technology has a new wearable just around the corner. Like the Apple Watch, this gadget is only meant for your wrist, but it fits in nicely with the other foldable screens we’re talking about today. The device is called the Alpha. Unlike other smartwatches on the market today, the bending display allows for a somewhat slimmer design. The chassis for the screen extends out a bit, with a few prominent buttons, knobs, and a camera. The rest of the chassis becomes the band complete with links. The whole design is just discreet enough to look like a typical analog watch at a glance, especially with the clock face screen saver showing. Unlock the phone, and the 4” OLED screen comes to life. Apps are divided into four color-coded categories, making the little screen easy to navigate. 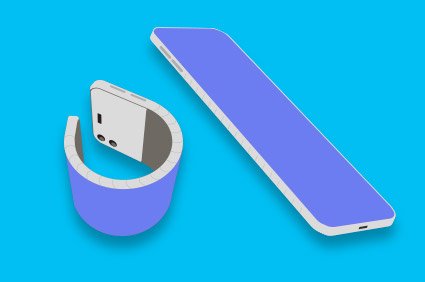 Likely reflective of their position in the wearable marketplace, Samsung has recently filed a patent for a bendable phone that can curl around one’s wrist like those snap bracelets from the ‘90s. The concept images in the patent look just as silly. You’d probably want to treat your phone more gently than a kid’s toy though. The device is quite long, the screen abnormally skinny, and it fits around your wrist with the display facing outward. Hopefully Samsung is going with some seriously durable plastic, because this thing is going to get pretty banged up just from everyday use. It looks like, in addition to the Galaxy Fold, Samsung has ordered a third patent for a clamshell style handset, so the development team is covering all of their bases.

Blackberry was the first hybrid, truly blending the utility of a personal assistant and the simplicity of a cellular device. It wasn’t until the iPhone that the mechanical opening, physical keyboard, and PDA UI style began to slowly fall out of favor. Today, Blackberry still makes mobile phones with physical keyboards. They’re shaped differently and have digitizers standard now. Other than stubborn Blackberry fans, there aren’t many people who can honestly say that when it comes to handsets, they prefer to keep their keyboards on a separate part of the device entirely. 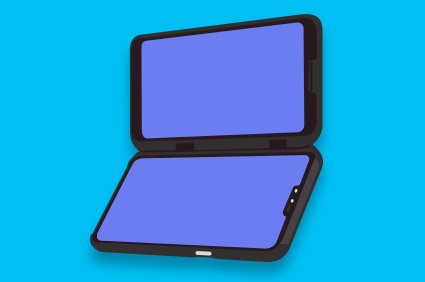 Enter the LG V50 ThinQ. This take on the clamshell design isn’t really a foldable screen. More of an accessory screen. Like having one computer monitor for email and another for browsing the web. You can clip the additional display onto your phone and use it for video game controls, to watch a streaming service while sending emails, or simply as a pleasant background to tasks. The second screen can snap shut over the main display, protecting both screens and allowing users to keep them attached at the hip in between uses. No price has been announced yet, but like the Moto Mods, we predict it will be a cost-effective alternative to the $2k plus flagships.

So. This is what we meant by “ridiculous or whimsical.” When we picture bendable, foldable, wearable smartphones, we usually picture the origami, or a loop-de-loop. An innovation like a posable, adjustable screen should be used for something…well, useful. The LG Bendi pushes the limits of that word. In addition to the V50 ThinQ, and not dissimilar from Samsung’s three patent strategy, LG is playing the field with their second design. But the Bendi could be more than just a phone. On the surface, a phone you can roll up sounds like a superfluous luxury. Now picture a television you could roll up and slide into a poster tube. A TV or large tablet you can easily unfurl on your desk at work or table at home to manage projects on a surface you can stow. Right now, not much is known about the Bendi project other than its core functionality. We predict that it won’t have much room to compete in the handset space but that LG may take this to home entertainment where they already have a well-known foot in the door. 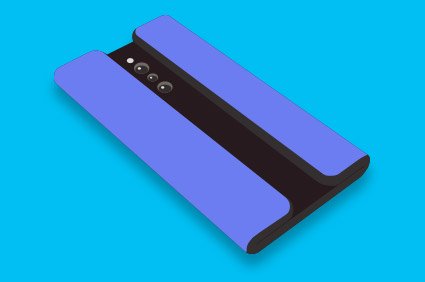 Not quite fitting into the same category as the Galaxy Fold and the Mate X, Xiaomi’s Mix Flex likewise may leave some scratching their heads. This phone/tablet hybrid opens up to a competitive screen size. But instead of closing like a book, the handset has a crease an inch or two into the left and right sides of the screen. These side panels to the screen fold back. Rather than having a single, complete rear display and only one waterfall edge, the phone features two display edges and two separate rear screens. We can’t find a reason that this particular form will benefit users more than the Galazy Fold or Mate X, but Xiaomi is putting a lot of buzz into their marketing for the device, so we will see what reported use cases reveal.

It all comes full circle. Many people think back nostalgically on their durable, simple Razr handset. The epitome of flip phones for that brief period when folding your phone closed was the obvious evolutionary step. The new Razr may try to re-capture that glory by returning to the iconic design. 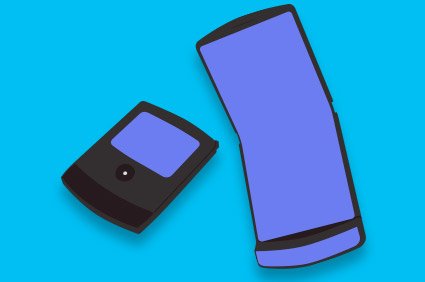 Judging by their patent application, though, we doubt it. Looks like they are following the crowd. Their new, as-yet unnamed Razr will open and shut with a wraparound screen, like the Oppo and the Mate X. Like many of these prototypes little more is available at this time. We are estimating late 2019 for a release. If it is anywhere near as successful as the Moto Mods campaign, Moto may have another hit on their hands.

You can be sure that whether you’re running a classic iPhone X, a foldable phone, or a tablet, you will be able to use the CV Mobile app to manage your content. The Contentverse ECM solution is available for web access on Macs and on-premise installations for Windows systems, as well as hosting in the cloud. With the ability to look up any document on the go from the comfort of your own phone, Contentverse remains one of the most innovative solutions to content management needs.